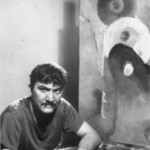 Theodoros Stamos, the youngest member of the first generation of Abstract Expressionists, was born in Manhattan in 1922 to Greek immigrant parents. At the young age of fourteen he won a scholarship to New York’s American Artists School, where he studied sculpture, but from 1937 onwards focused on painting.

In 1939, Stamos left school to strike out on his own. To support himself he worked at a frame shop on the East 18th Street, where he met Paul Klee, Fernand Leger and Arshile Gorky.

Stamos was only twenty when he had his first solo exhibition (1943) at the Wakefield Gallery in New York. His work caught the attention of Gorky and Barnett Newman, who saw in his paintings an interest in myth and biomorphic abstraction similar to their own.

By the mid-1940s, Stamos was becoming well established. He exhibited at the Whitney Museum annually from 1945 to 1951, the Carnegie Institute and the Art Institute of Chicago in 1947 and the Museum of Modern Art in 1948.

In 1946, the Museum of Modern Art in New York purchased his work ‘Sounds in the Rock’.

He travelled to Europe for the first time in 1948 where he visited France, Italy and Greece, including the island of Lefkada, the birthplace of his father.

During the late 1940s, Stamos became a member of ‘The Irascible Eighteen’, a group of abstract painters who contested the Metropolitan Museum of Art’s policy towards American painting of the 1940s. Members of the group are considered the ‘first generation’ of abstract expressionists and include Willem de Kooning, Jackson Pollock and Mark Rothko. They were the first American artists that consciously made a break with the School of Paris in pursuing their agenda for a new approach to painting.

During the 1950s his work was exhibited regularly in New York both in solo exhibitions and alongside the art of his fellow abstract expressionists, many of whom were a decade or two older than him.

His earliest compositions, painted in browns, greens and golds, evoke the appearance and texture of the earth: rocks, terrain, sand and water. The forms resemble, in some cases, fantastic amoeba-like creatures and plants drifting underwater, in others, planetary bodies inhabiting otherworldly, barren terrain.

Stamos retained his interest in the natural and the infinite throughout his life. His paintings often glow with a light that seems to originate from somewhere behind the paint. From the 1970s, this inner light became even more pronounced in his ‘Infinity Field’ series; these luminous works seem to vibrate with energy as if radiance is just about to burst through the pigment.

His work is in numerous public and private collections worldwide, including The Metropolitan Museum of Art, The Museum of Modern Art, New York and The Whitney Museum of American Art.