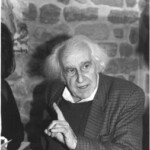 Alkis Pierrakos was born in Thessaloniki in 1920.

He studied at the Gewerbeschule in Basel, Switzerland between 1948 and 1952 and continued his studies in London at the Slade School of Fine Art and the Central School of Arts and Crafts.

Early in his oeuvre Pierrakos painted figurative works in a personal lyrical expressionistic manner. From the 1970s onwards, he moved on to a kind of abstract expressionism creating works dominated by large colour surfaces, while later in life, remaining in the climate of abstraction he re-introduces figurative elements in his paintings. He worked in the mediums of oil, watercolour, tempera and ink.

He was a member and coordinator of the group ‘La Ligne et la Signe’, a collaboration group between architects and artists that aimed to combine the limitations of drawing with the freedom of colour.

Pierrakos held many solo exhibitions in France, Greece, the United Kingdom and Italy and participated in many international exhibitions such as the ‘Artistes Etrangers en France’ at the Musee d’Art Moderne, Paris (1955); the ‘Twelve Greek Artists’ at the Redfern Gallery, London (1960); the ‘Peintres et Sculpteurs Grecs de Paris’ at the Musee d’Art Moderne, Paris (1962); the Salon d’Art Sacre, Paris (1963); the Salon Comparaisons, Paris (1976 and 1980); the Europalia, Brussels (1982) and the Salon International de l’Art Contemporain, Toulon (1984). 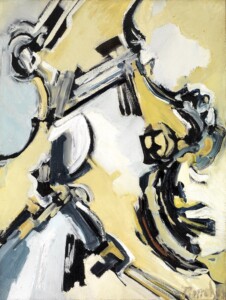